Artillerymen the world over know that they are the decisive factor on the battlefield! George was an Artilleryman and created his interpretation of an Artillery motto while at the Basic Officers’ Artillery Course at Ft Sill in 1960. It is the first caricature in his series.

The Cavalry is the eyes and ears of the ground gaining forces. The border duty by the Cavalry Regiments in Germany during the Cold War will long be remembered. The mobile sharp eyed Cavalryman is the forward combat element on the battlefield.

TheUS Army’s mission is to engage and defeat the enemy as well as to occupy its territory if necessary. This calls for the American Infantry --- the Queen of Battle and the soul of the Army. Here is a determined Infantryman facing some of the enemy soldiers in the long US Army’s history since1775.

The armor brings devastating shock action and firepower to the battlefield. Tactically and strategically superior, the US Armor has no equal in the world.

The Sikorski UH-60 Black Hawk helicopter is the mainstay of US Army Aviation and the symbol of the three dimensional battlefield of today. Proud aviators pilot the robust and versatile Black Hawk in many of the world’s armed forces today.

Skilled and ready, the Artillery Forward Observer shares the life of the front line solders. Woe be it to that enemy who crosses his calibrated eyeballs! George’s first assignment included the duty as a Forward Observer. Here he vicariously placed himself in a combat situation to fit those times in the early 1960’s.

An airfield is a very busy place where perfection is the only standard for the men and women of Air Traffic Control located on airfields and airbases at home and abroad. The picture was inspired by controllers at the Schwäbisch Hall Army Air Base in Germany.

Massive loads of any type are no problem for the work horse of US Army Aviation, the Boeing CH-47 Chinook medium lift helicopter. The air crews of the forever improving “Hook” seasoned over the years in conflicts and humanitarian missions around the world can haul about anything - and more.

George called on his own experiences as well as the observations of others to create his memorable caricatures. Click on the image to enlarge it and see a selected detail. The prints are signed by the artist. Several of the caricatures previously out of print are available again at a higher price. 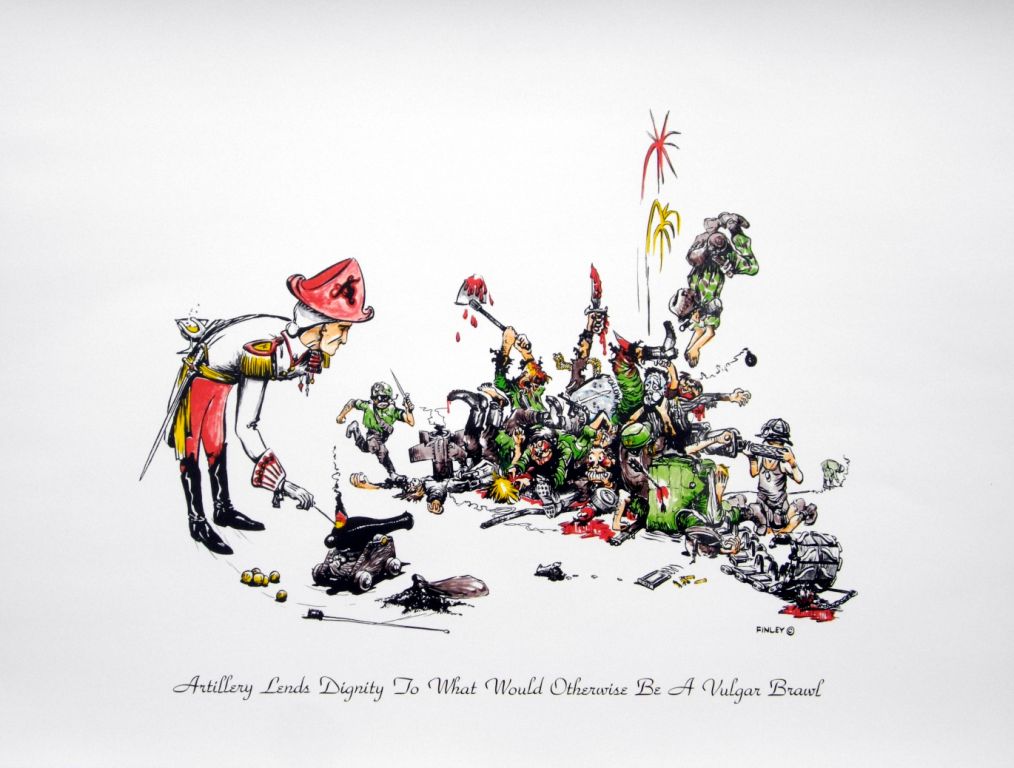 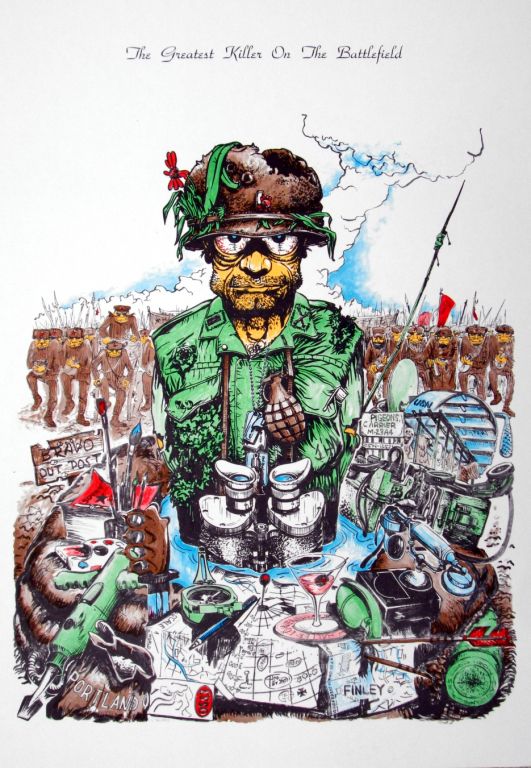 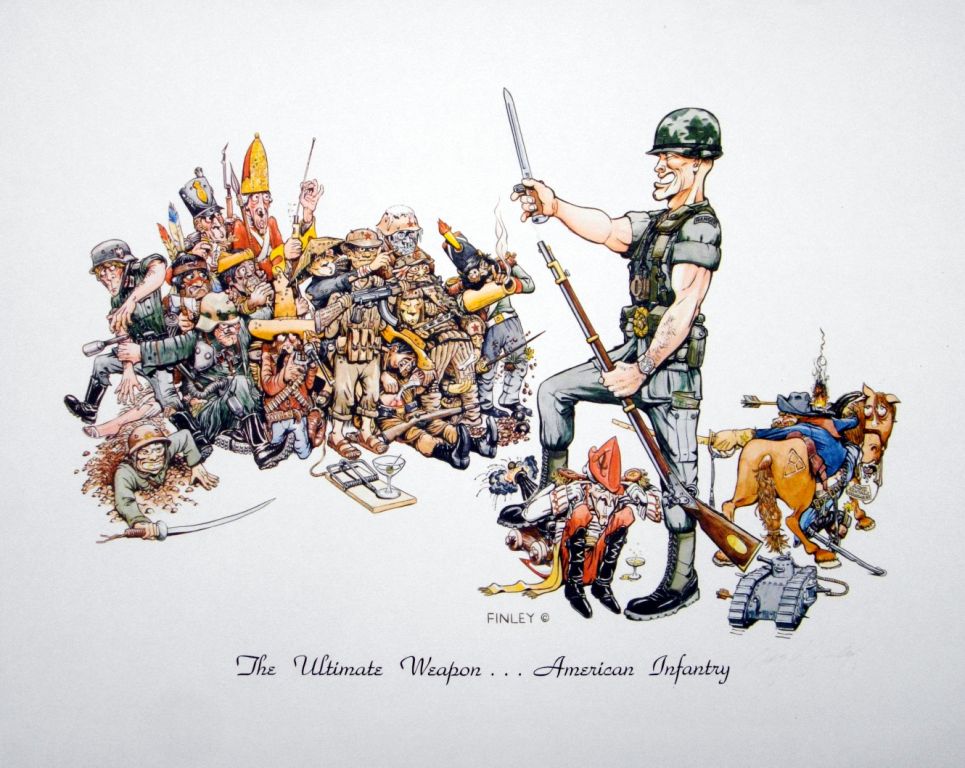 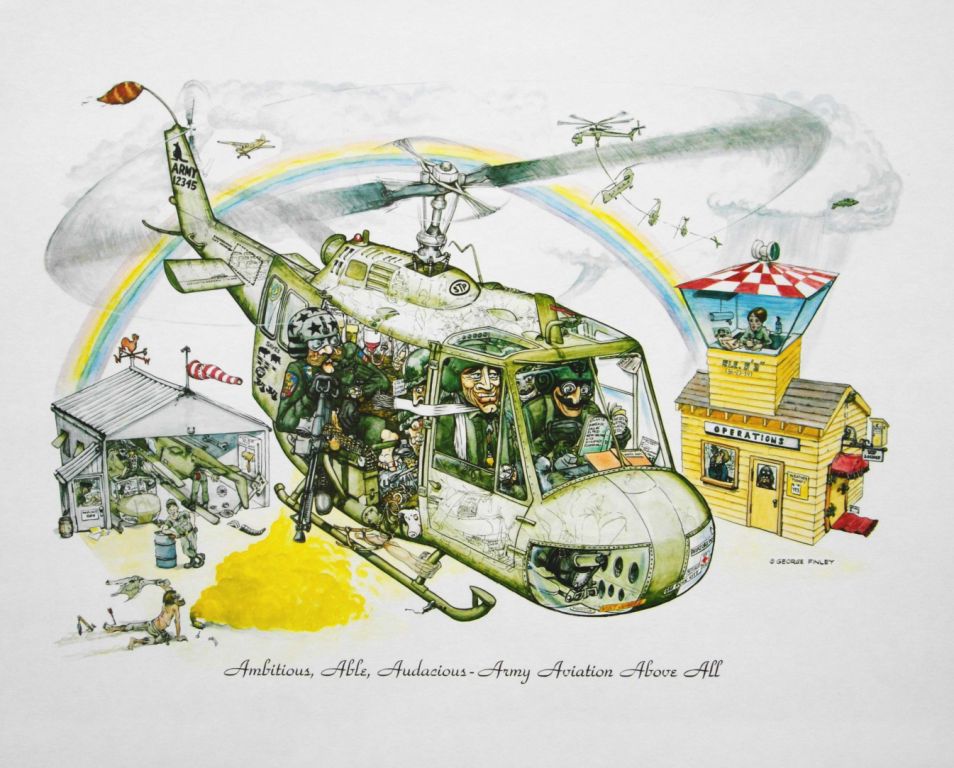 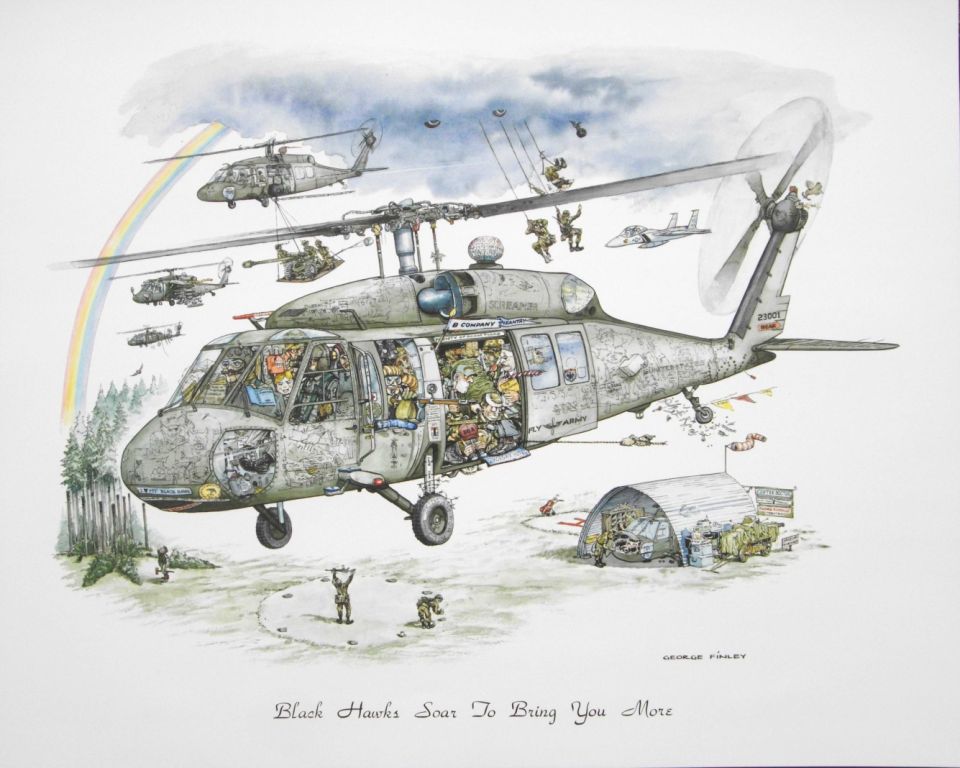 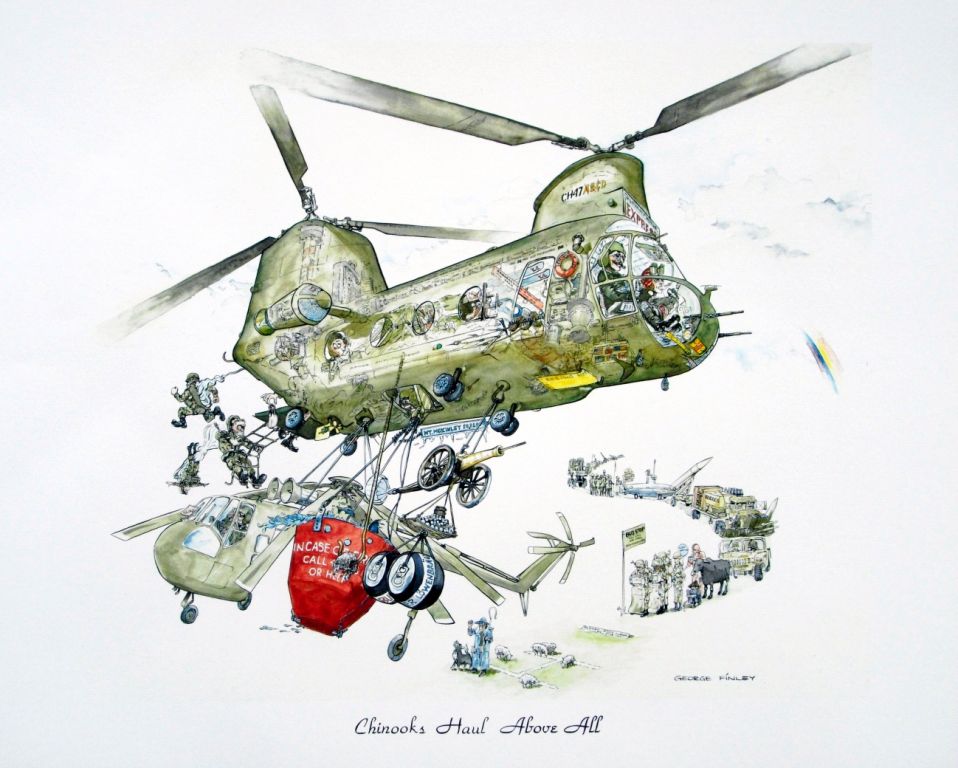 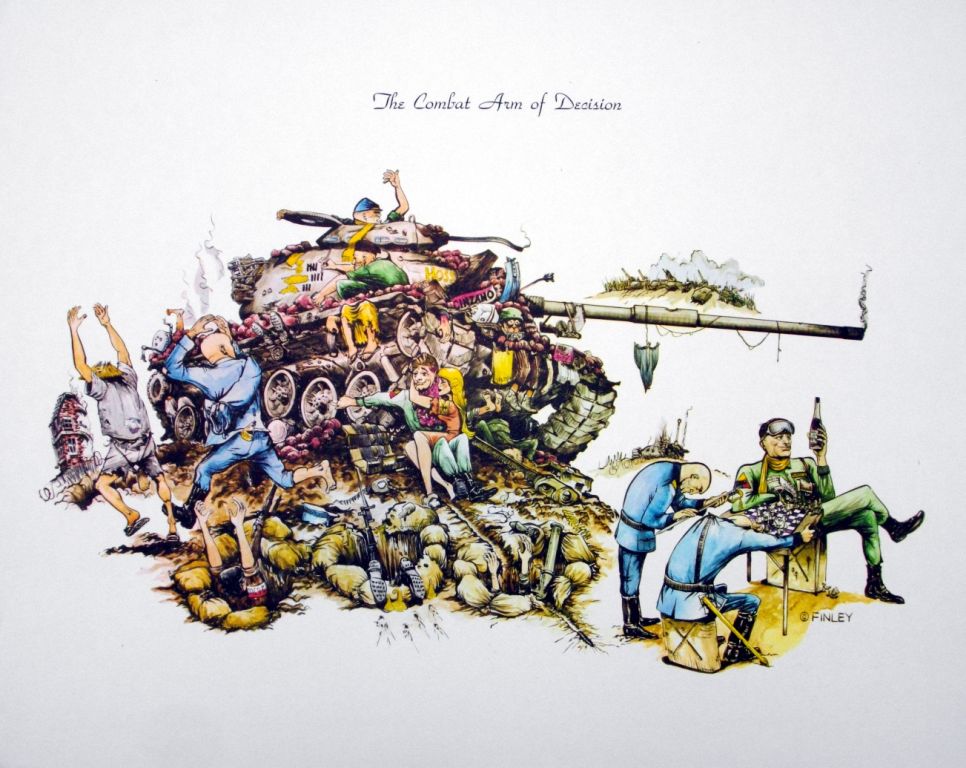 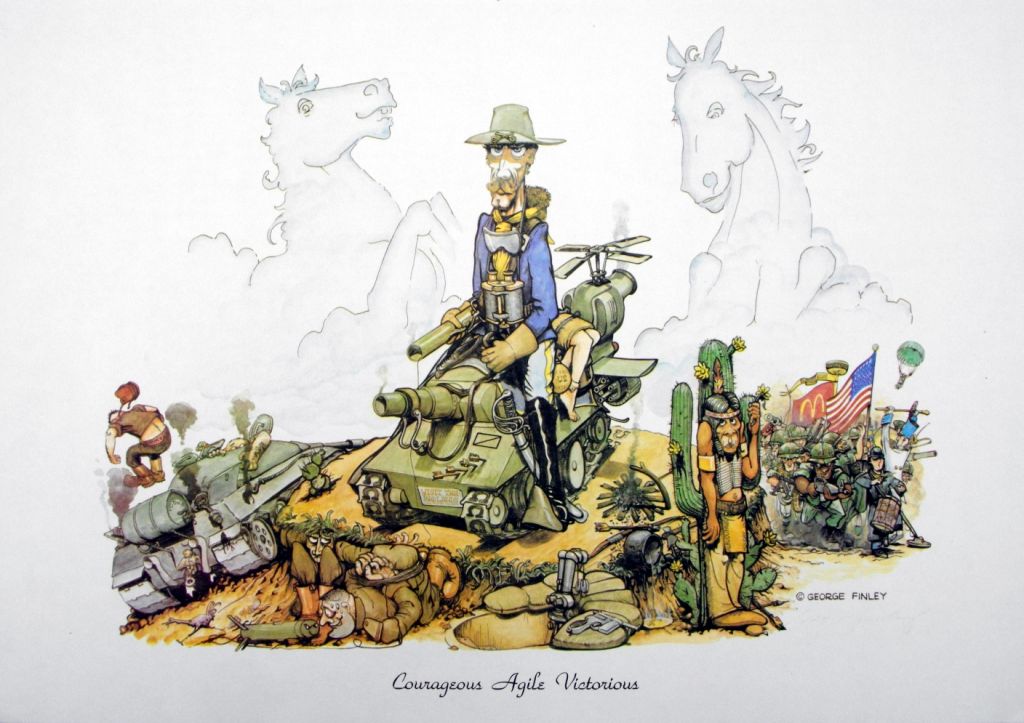 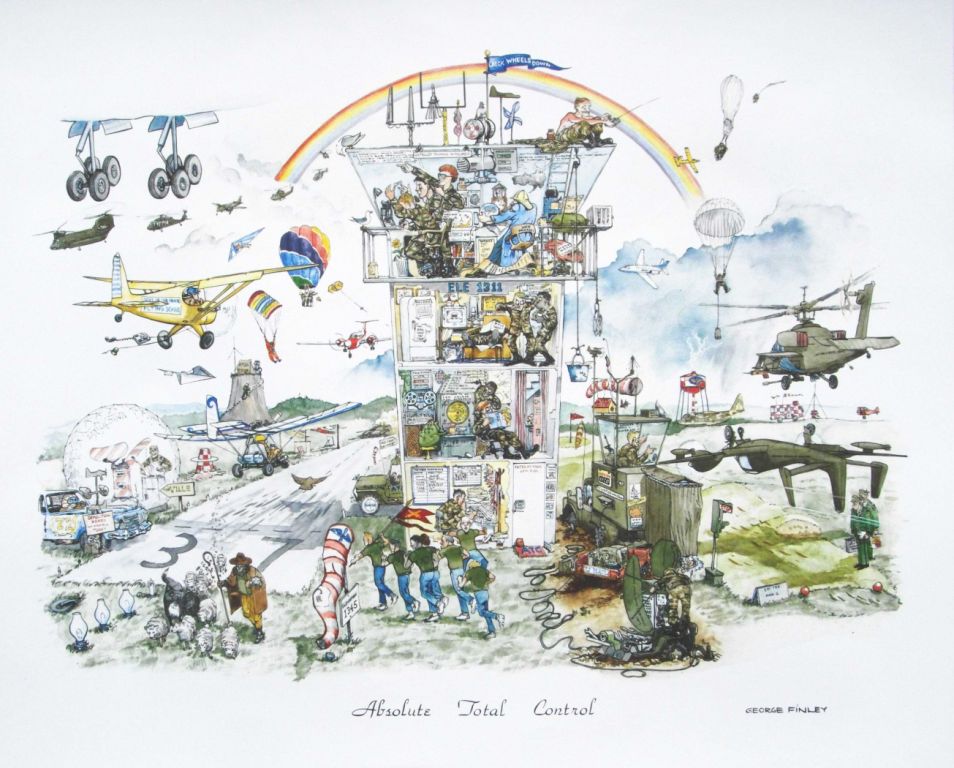